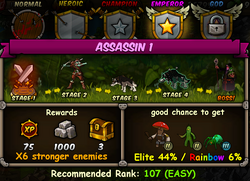 PvE — Player vs Environment. To the PvE focused players the primary challenge comes from tough mobs like instance bosses rather than other player characters.

The PvE mode contain a storyline that is narrated as the player progresses through missions, Daily Portal for farming resources, Trials where you can get elite creatures and resources and Raids available by creating/joining a guild.

Retrieved from "https://forgeofgods.fandom.com/wiki/PvE?oldid=6325"
Community content is available under CC-BY-SA unless otherwise noted.